Back in the early 90’s, while we were stationed at RAF Chicksands AB, England, I happened to be at the commissary deli counter one day when someone was picking up a party tray.  Unlike the usual party tray of folded meat and sliced yellow and white American cheese, this one was different.  It was so colorful and eye-catching, lying on a bed of curly lettuce.

I had never heard of a wrap before, and after seeing how pretty they looked, I was hooked; I had to know how to make one.  So I snagged a pen from my purse and spent the next ten minutes picking the brain of the girl working at the deli counter.  When I left the commissary that day I had all the ingredients necessary to make these wraps, and a sketched diagram of the placement of each element.

Tortillas come in lots of flavors and you can put nearly anything in a wrap.  Substitute leftover chicken, pork, or beef and the veggies of your choice for a quick weekday dinner.  You may even decide to have a warm wrap and fillings instead of a cold one.  If so, just place the tortillas on a plate, cover with a damp paper towel, and nuke for 30-45 seconds before filling them.

All these years later and we almost always have the ham and turkey wraps because they are still our favorite.  Every time I make them I have to make extras because Mark wants them for lunch the next day.  These wraps are wonderful party fare because all the work can be done the day before.  They are also great for after-school snacks or served during halftime of a football game.  However, they are especially nice served with fresh berries or peaches on a lazy summer day.  Enjoy!

dried chives or Italian seasoning (to flavor the cream cheese)

1-2 pounds meat of choice (if using deli meats, have them shaved as they look better in a wrap and you can stretch them further)

1. Prepare the veggies and have all your ingredients layed out in front of you.  It is best if you work on one wrap at a time.  Mix the cream cheese and herbs of choice.

2. Spread a thin layer of the cream cheese mixture over the entire tortilla. 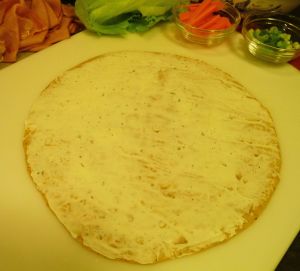 3. Referring to the picture, place the sliced cheese on one side only of the tortilla about 1/4 of the way around.  Cut the cheese in half if necessary. 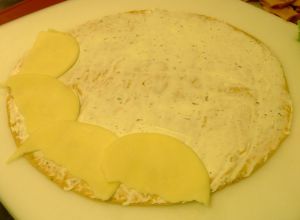 4. Place about 2 good handfuls of meat on top of the cheese. 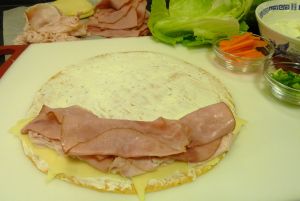 5. Place carrot slices down the length of the meat.  Sprinkle chopped green onions over the meat.

6. Place a thick layer of iceberg lettuce on top of everything. 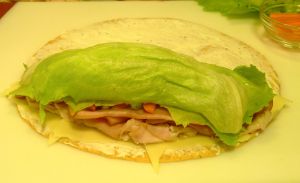 7. Tightly roll up the tortilla.  Slice the wrap into sections.  Serve cut-side up.

Hello and welcome to my digital cookbook and craft log. I like being creative in the kitchen as well as the craft room. Things may not always come out as planned, but that doesn't stop me from trying. View all posts by Elizabeth Levesque